Ever since my older daughter got into Barbies, I felt she needed an Asian Barbie. Actually, I didnt think anything of it. It was my wife that pointed out that perhaps she shouldn’t just have all blonde haired, blue eyed Barbie dolls.. giving her the impression that, I dunno, only blonde hair is beautiful? I dunno.. anyway, I thought about it and figured, “yeah.. they have African American Barbies.. they must have a multipurpose Asian Barbie”.. so the search began.. I didn’t think it’d be hard.. but Googling for it, I realized there are others who are also on a quest to find an Asian Barbie or have Mattel make an Asian Barbie.. my wife said Teresa is supposed to be Barbie’s ambiguously Asian friend because she’s a brunette.. my own search found that possibly Kira is also an ambiguously Asian FOB (that’s Friend of Barbie for you uneducated ones).. searching further, I found, like, collector Barbies.. Asian Barbies in traditional dresses or gowns.. but that’s lame.. so is Japanese Barbie going to jump into the passenger seat of Barbie’s Corvette with Barbie herself wearing a bathing suit? Sure, you can change Asian Barbie’s outfit.. but why isn’t there a “regular” Asian American Barbie who wears regular clothes? Just because Asian Barbie is Asian, doesn’t mean she NEEDS to only be presented in a traditional Asian outfit.. anyhow, once I got back to Taiwan.. I figured SOMEONE in Asia must see the need for an Asian doll.. whether its Barbie or a fake Barbie.. it didn’t matter.. I mean, there MUST be an Asian doll somewhere in Taiwan.. so I went to Toys R Us in Hsinchu.. I looked up and down the aisles.. I saw some Japanese rag doll looking thing.. but strangely, the doll looked more Caucasian than anything else.. I saw the My Scene dolls.. there was one doll that has Asian looking eyes.. but frankly, I think those My Scene dolls are a little absurd.. rather than teach your child that blonde hair, blue eyed is “normal” (as with Barbie), you teach them its OK to look like a hooker (as with My Scene dolls)?.. anyways.. I searched and I searched and finally, I found something!.. yes.. an Asian Friend of Barbie, who really looked Asian.. not ambiguously Asian, but really Asian.. 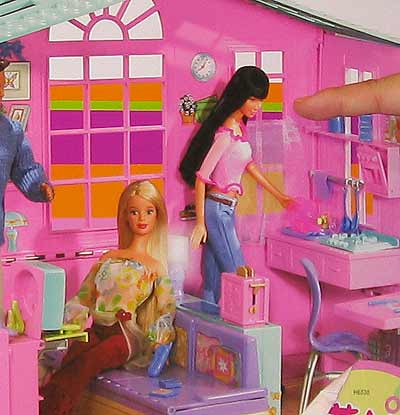 Ok, they do have a Michelle Kwan wanna-be ice skater Barbie.. but come on.. how come California Barbie doesn’t come in an Asian variety? Oh I get it.. the only Asians that Barbie hangs out with either serve her or entertain her, is that it? Where’s the Asian Ken driver?

If Barbie was Miss Daisy:

2 thoughts on “The Quest for the Asian Barbie”