I started working full-time a few months out of college.. at the time, the first thing I wanted to do was to buy a daily driver while I disassembled my 1987 Mazda RX-7 Turbo II and transformed it into the rotary rocket I always wanted.. my first mistake was thinking I could buy a 1986 Toyota MR2, keep it as a daily driver, and not spend any money on it (so I could spend money on the RX-7).. the MR2 ended up being a money pit.. I can’t remember (don’t want to remember) how much money I put into it.. but by the time I was satisfied with my “daily driver”, it was turbocharged (with one of the few HKS turbo kits to ever make it into the USA), had TRD sway bars and springs, Tokico Illumina shocks, rollin’ on old skewl Work Emotions, and a bunch of other parts in my garage waiting for installation (272/264 cams, sprockets, intercooler, a 4AGZ long block, blah blah blah).. but around that time, the MR2 also had a spell of bad luck.. by the time I sold it, the passenger side fender was black primer (original Toyota replacement fender even), it was on its 3rd transmission and 2nd engine, which was consuming water like an 18 year old fraternity boy consumes free beer.. after dealing with the disillusionment of the MR2, I once again tried to buy a daily driver so I could spend more time and money with the RX-7.. that lead me to mistake #2.. buying a 1994 Honda Civic EX Coupe.. I figured the Honda was virtually indestructible.. it had power windows and a sunroof.. a good daily driver.. after spending thousands of dollars swapping the engine (B16A with GSR trannie), replacing the anemic camshafts (with Type-R cams), replacing the suspension (with Bilstein/Carrera coil overs and Spoon struct tower bars), replacing the seats (with black and red Del Sol seats), headers (DC 4-2-1 stainless), 2 exhaust systems (RS*R and Apex’i), a set or 17″ wheels, and a stereo system.. I realized once again, I had failed at buying the right daily driver.. fast forward to the present.. I’m driving a 2005 Infiniti G35 Sedan with a 5-speed AUTOMATIC.. I needed the sedan so I can haul my daughter to preschool (in her Recaro baby seat).. by now, I had kind of lost hope with the RX-7.. I figured it would be something I would finish one day after winning the lottery.. I dreamed of the day I would call AAA to tow my car, walk into XS Engineering and drop off my RX-7 with a briefcase full of cash.. however, that has all changed.. I recently just went to the Formula D Finals @ Irwindale, CA.. watching the cars drift is fun.. but I think the most lasting memory was watching the cars launch from the starting grid.. blasting at full throttle until they reached the banked left hander.. seeing that brought back memories of the street racing days.. so now.. I’ve become consumed with the idea of finishing my car.. I even searched Google, looking for clean RX-7s that would serve as inspiration.. here is that car: 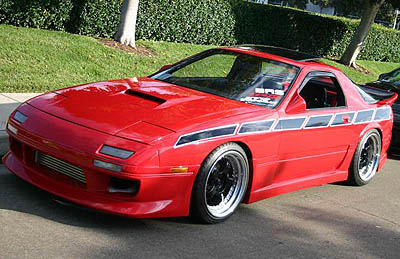 So.. my intention is to keep this “thread” updated with my progress and the whole process.. in part to stay motivated to finish and so others can learn from my mistakes..

One thought on “Project FC3S S4”