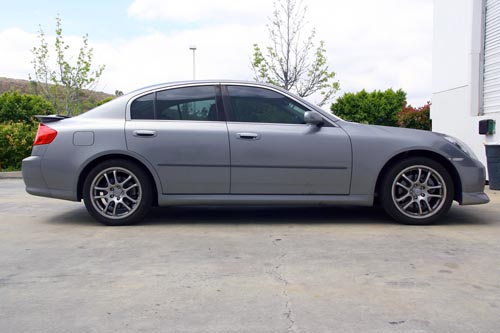 Its not a very good picture.. where I wanted to take the picture, I had to use my Tamron 17-50 at the wide end. In the second (after) picture, I think I was standing further back, not to mention there was someone parked in my original spot. In any case, it gets the point across. I have more pictures which I will post later, but as it is now, its quite a drop. I think the back is around 2″ right now and the front is probably closer to 1.25″-1.5″ or so.

The car is lowered with KW Suspension Variant 3 coilovers. The quality and craftsmanship are amazing. I’ll post pics of the coilover set soon. The only thing that I wasn’t too keen on is how you adjust the rebound and compression of the shock. The rebound is on top, as most people are used to (Tokicos, Tien, Konis, etc). But the compression adjustment is at the bottom, right above the part where the shock mounts to the spindle. I’ll post pics later, but just trust me, it would’ve been easier if they just had a knob on the shock body or so.

How’s the ride? In short, it rides better than the stock Sport suspension. It is probably just about as firm, but it handles bumps much better. I’m currently using the “recommended settings” that KW Suspension gives you in the box. But there’s no bounce, no harshness, and like I said, I’m more inclined to say it rides better than before.

If it looks like the back of my 2005 Infiniti G35 Sedan is lower than it should be, you’re probably right. I’ll have to let everything settle a bit, then go back and adjust it. But for now, I’m enjoying the lowered ride height (not really enjoying the crazy negative camber in the rear)..