Just read this over at Crunchgear.com.. but someone had posted this image of a “Canon 1D Mark IIIN” showing up in their inventory system at work.. with PMA around the corner, I wouldn’t doubt it.. Canon needs to do something to the 1D quick to compete with Nikon’s latest offerings..

Commenters over at Crunchgear.com questioned the “4,240 Euro” price tag associated to the Canon 1D Mark IIIN in the pictured screen.. however, if I recall correctly, Canon doesnt seem to give Europeans the benefit of the Euro:USD exchange rate and quite often will suggest a selling price (MSRP) in Euros that is equal to the USD MSRP.. as evidenced here at DPReview.. the Canon 50D’s USD MSRP is $1,299 while the Euro MSRP is also 1,299.

I’ve been toying with the idea of getting a netbook.. my biggest issue, however, is that I dont really know what I’d do with it.. talking to other people who are using netbooks, they all claim that it works great for “everyday” tasks and some “light” photoshopping..

I currently have a beater laptop that I keep laying around for precisely these tasks.. I dont want to “pollute” my Lenovo T61 that I use for real work by firing up Photoshop CS4 when I need it.. so how would a netbook compare to this beater? The beater is a Toshiba Tecra M2 with Centrino 1.6GHz and 1GB of RAM and an nVidia FX5200 GPU.. not a speed demon, but it gets the basic stuff done.. the problem in comparing an Atom 1.6Ghz to a Centrino 1.6GHz is that most benchmarks for the Atom 1.6GHz are using different benchmarking tools than when the Centrino 1.6GHz was benchmarked some 4-5 years ago..

Anyhow, being that my Tecra M2 is a beater.. I put Windows 7 on it a few weeks ago.. here’s how it fared in the Windows Experience Index:

So I was surprised to come across this post at jkOnTheRun detailing their experience on installing Windows 7 on an MSI Wind U100 (which is exactly the netbook I’d be interested in).. here’s their Windows Experience Index:

So, it looks like a netbook MAY be able to replace my beater.. but it is a little slower (2.9 vs 2.2 on the Processor index).. although the MSI Winds come with a factory overclock of 25%.. which should put it up in the same leagues as my beater..

On second thought.. dont get a U120.. it comes with 1GB and its NOT expandable.. see more here.

Just thought I’d finally try out the WordPress app for iPhone (you can find it in the App Store). Here’s a pic I took with my iPhone a while back of my boss’s Bugatti Veyron (and yes, I drove it.. and yes, its fast.. and yes, I’m at peace with the fact that it will most likely be the most expensive car I’ll ever drive in my lifetime) 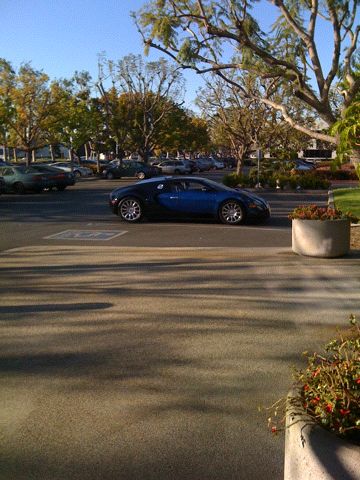 It was pretty short notice.. it seemed like this year’s event was a little last-minute.. but it went OK nonetheless. Mike actually asked me to go just to check it out and snap some pics.. to be honest, I wasn’t all that excited. I told him if there was no drifting, then there’d be nothing to watch. He didn’t like that too much and bombarded me with a handful of insults. 😆

After checking out the schedule and since I’m relatively close to Cal/Auto Club Speedway, I figured I’ll check it out in the morning and get home in time to go to a friend’s kid’s birthday party. But I have to say, one big reason I decided to go was because DLo (AKA Eric Hsu) mentioned on his blog that he was going to be taking out the Beast AKA his XS Engineering Skyline R32 GT-R. I’ve seen the car in person many times, but never “mobile”. Plus, Mike and Wen said that they had contacted a handful (10-12) Skyline owners and that they’d come out for the “GT-R Shootout” at the event (it turned out to be a separate heads-up class, basically).

The event was actually much better than I had expected. There were lots of racers/racecars. I also have to hand it to the Honda drag racers who have kept at it. I saw Honda after Honda blast down the quarter mile running 9s and 10s. When I left Saturday morning, the cutoff for the Pro-Am FWD class was at 10.56 or something like that.. very impressive. I also saw a couple Hondas run 9.60s. But the highlight of my day was definitely seeing the R32-R35 Skylines line up and race down the track. One R35 (from Titek?) was running mid 11s and one that looked stock ran a 12.0 while I was there. Wen’s R33 that made 870+ WHP only managed a 12.1 (while I was there) but he figured he had broken something in the driveline, which is why the car was trying to drive itself into the wall. I heard Eric Hsu ended up qualifying Sunday and won the GT-R Shootout with a 10.40 pass.. not bad.

So anyway, here’s some of the images I took in the 2 hours that I was there.. look for full media coverage in an upcoming issue of DSPORT Magazine or on their website, http://www.dsportmag.com

[photopress:IMG_9711_PS.jpg,full,centered]
A 9? second Scion tC.. who knew it existed? Not me.. but very impressive

Wow.. one after another.. Sport Compact Car has now joined the ranks of Turbo & Hi-Tech Performance Magazine. Poof, just like that.. 115 people laid off by Source Interlink. I guess with a stock price of $0.17, everyone should’ve known it was coming.

I still have one of the original issues of Sport Compact Car, before it was bought by who ever bought them back in the early 90s. Back then, it featured a lot of So Cal local cars that frequented the street races.. three that come to mind are Shoreline Racing’s (local street racing crew) 1985 Mugen Honda CRX (complete with Mugen widebody), Sammy Ho’s 1986 or 87 Honda CRX Si with 16″ SSR Neos and the legendary 1988 Toyota twin-charged MR2 (I want to say his name was Dean, but I dont think that’s right..). Around 1993, I was personally on-hand to witness the twin-charged MR2 smoke the crap out of a motorcycle (of course, the motorcycle gave the MR2 a “flying 10 car” start). I’ll have to dig it up sometime and scan some pages for old time’s sake. I never really read SCC after they were bought out (the first time).. so I can’t say I’ll miss it.

In any case, now the import automotive performance community is left with Super Street, Modified Magazine, and of course, our favorite, DSPORT Magazine.