After class, I drove down to DSport to hang out while they worked on the D1 event program. I brought along my camera gear because I was hoping there’d be something to shoot.. anyway, while I was there, I went back to Mike’s house to pick up his Nissan Skyline R33 GT-R.. we drove back in it, but since it never warmed up, he never got on it.. I was really suprised at how loud the Hollinger transmission is though.. he just put it back together, but last week he took it up to Palmdale (LACR) to run some quarter miles.. on his first pass, he ran a 9.97 with a 1.85 sixty foot (he normally launches with 1.60 60-foots).. anyhow, after that 9 second pass, he wasn’t allowed to run anymore because he didnt have a certified roll cage.. prior to taking it to the track, he tuned it on XS Engineering’s dyno.. 879whp at about 3 bar.. since he’s running a 2.8 liter now, the peak torque increased a lot and came on about 600 RPM sooner.. also, at about 6k RPM, horsepower was increased by about 200whp.. pretty impressive.. you can read all about it in the next issue though..

Anyway, I shot some pics while I was there.. both to show Mike that Canon’s high ISO performance is pretty impressive and just to mess around with my camera.. when I told him I was going outside to shoot some pics, he said, “in the dark?” and I said, “yeah.. ISO3200, baby”.. here’s the shot. 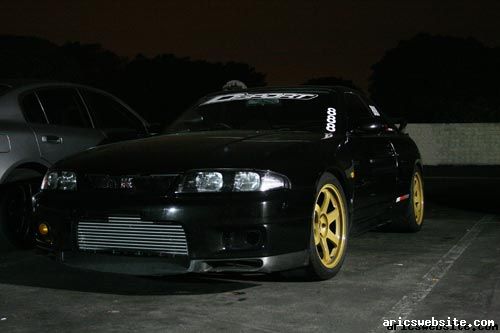 Here’s a crop of the sky with a part of the Skyline’s windshield in it to show you where its cropped from..

After that, I went inside and grabbed Mike’s tripod and shot a few on the tripod.. not that impressed, but its OK, I guess.. 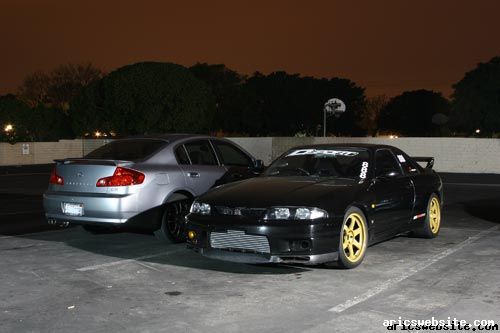 Anyways.. that’s about it.. tomorrow, I’m heading down to Dynamic Autosports to see what I can shoot there.. Ed’s Peak Performance S14 is being prepped for D1 on March 3rd.. I think his new driver is a dude from Japan, Robbie Nishida with Falken.. I’ll post more pics later..